The A to Z of Bridgwater Guy Fawkes Carnival

A –     Arts Council England (ACE)
Arts Council England, the Government funded body, who has the responsibility of distributing money from the Government and National Lottery to the development of arts in England has been a big sponsor for Bridgwater Guy Fawkes Carnival in recent years. Prior to the COVID-19 pandemic, ACE had supported and awarded grants to Bridgwater Carnival for the past eight consecutive years.

B –   Bridgwater: The home of carnival
Journalistic records show it can be traced back to 1847, making Bridgwater Guy Fawkes Carnival the oldest event of its kind in the United Kingdom. It now has the reputation for being one of the largest illuminated processions in the world.

C –   Carts
Carnival floats in Bridgwater were originally constructed on hay carts or log carts. The name of ‘cart’ has stuck!

E –   Economy
The local economy benefits greatly from the activities of Bridgwater Carnival, and many local eateries, pubs and shops report record takings on the day the carnival comes to town.  Various research projects and studies have concluded that Bridgwater Carnival is worth an estimated £4 million annually to the local economy – £2 million during the weekend of the carnival and a further £2 million from carnival related activities throughout the year.

F –   Features
The all singing, all dancing, all moving style of carnival entry.

H –   Hardy Spicer Championship
Annually presented to the local Bridgwater carnival club with the greatest number of points in the procession and carnival concert. It was first presented in 1952 as the Hardy Spicer Challenge Cup. The 2019 winners were Gremlins CC with Curse of the Kraken.

I –   Information
Bridgwater Carnival’s continued popularity in recent times has been partly due to its strong social media presence and the role it plays in providing up to date information to its many supporters. Bridgwater Carnival’s official Twitter and Facebook accounts have over 5,200 followers and over 12,900 likes respectively.

K –   King James I
The origins of our annual carnival in Bridgwater can be traced back to the Gunpowder Plot of 1605 when Guy Fawkes and his fellow conspirators, failed in their attempt to blow up the Houses of Parliament. That story is well known to everyone, but what is not so widely acknowledged is that it was King James I and his parliament who decreed that the events of 5 November should be commemorated annually with the lighting of bonfires, a tradition which is celebrated across the nation to this very day

L –   Lights
In 1903 the first electric light bulb was used on an entry in the Bridgwater Carnival procession. Now the majority of the mounted entries have moved away from the traditional light bulbs and are using environmentally friendly LEDs (light emitting diode) to illuminate their spectacular entries.

P –   People
It is estimated over 2,000 people, also known as carnivalites, are involved every year with the organisation and staging of Bridgwater Carnival, all who generously give their time freely.

Q –   Queen
The Queen and Prince Philip were presented with a 1986 carnival video by the then carnival president, Bill Holland, after the royal couple visited Bridgwater in 1987.

R –   Route
The route the carnival procession takes is just over 1.7 miles long and it takes two hours to pass any one viewing point.

S –   Squibs
Giant fireworks originally made in homes throughout the town but now produced to a secret formula by leading firework manufacturers, especially for Bridgwater Carnival. Because of their size, the squibs are tied to poles (coshes) and, once lit, are held above the squibbers head until the firework extinguishes. Nowadays a simultaneous squibbing display is held in the town’s High Street immediately after the parade when upwards of 170 squibs are ignited at the same time creating a marvellous, unique display. The first recorded evidence of squibbing in Bridgwater was back in 1716.

U –   Unveiling of Squibbers Way
Bridgwater’s new link road was officially unveiled in December 2019 with a spectacular squibbing display. Representatives from Somerset County Council, main contractor Whitemountain, Bridgwater Carnival and other guests were in attendance as the public named ‘Squibbers Way’ was  officially opened. A squibbing team led by Bridgwater carnivalites took to their positions on the new Crossways Bridge and lit up the sky with a sparkling 90 second firework display. The Guy Fawkes cart then became the first vehicle to travel the length of the new road. le to travel

W – Winner for 2020
Following the live streaming of the ‘best of the best’ virtual carnival film on Saturday 7 November, carnival lovers will be able to vote for their favourite entry from the 88 featured in the two hour extravaganza. Voting will be extremely easy and can be done through a special free app called ‘CarniApp’ produced by SGS United Kingdom – Custom Services (Shepton Mallet), which can be downloaded from the App Store or Google Play. Each person will have just the one vote to cast, and they can only vote once from their mobile device. The voting window closes at 22:00 hours on 30 November 2020, and soon after it will be revealed who has won the accolade of being the best every entry into Bridgwater Carnival.

X –   Xanadu
In 1976 Marketeers CC were one of the first carnival clubs from Somerset asked to take their entry Xanadu to represent Bridgwater Carnival at the following year’s Easter Parade in London’s Battersea Park.

Y –   Yankee Doodle Dandee
Crown Inn CC’s 1948 entry Yankee Doodle Dandee was significant in the history of Bridgwater Carnival as it was the last competitive entry to use horses to pull a cart in the procession. The two shire horses used were covered almost entirely with flowers and were illuminated by electric lights.

Z –   Zoom
During the Coronavirus Pandemic and associated social distancing restrictions, many carnival clubs have embraced the use of Zoom and other video, voice and virtual conference facilities.

@RenegadesCC: EASTER GRAND RAFFLE 🐣 🥳 £2 per number or 3 for £5 for your chance to win from a range of fantastic prizes 🤩 Don’t be afraid to message us for further details and payment method. Good luck!! 🍀 https://t.co/d68tKztzlg 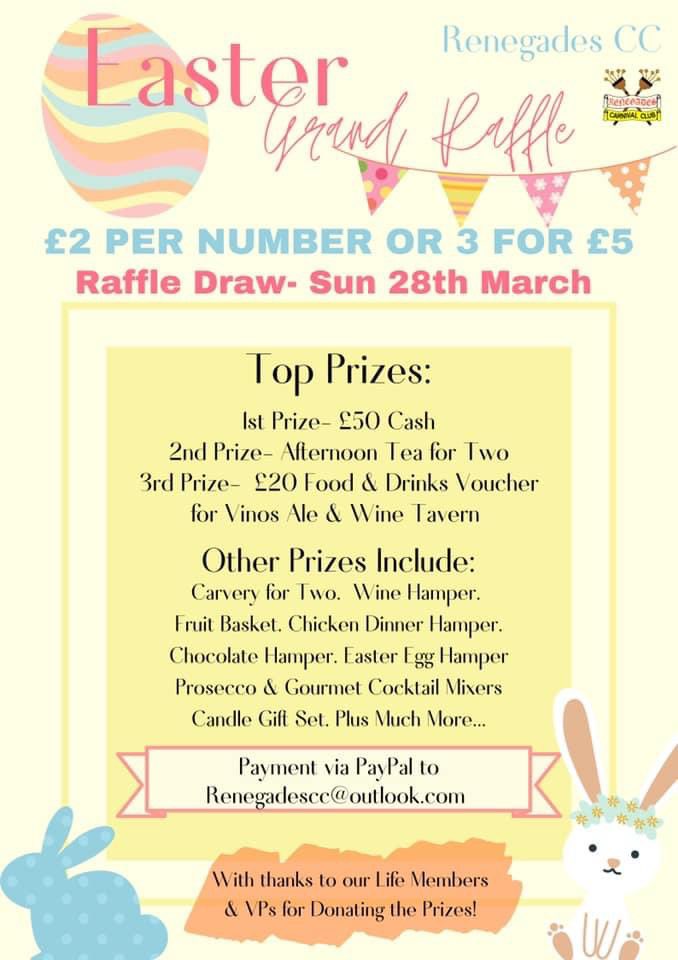 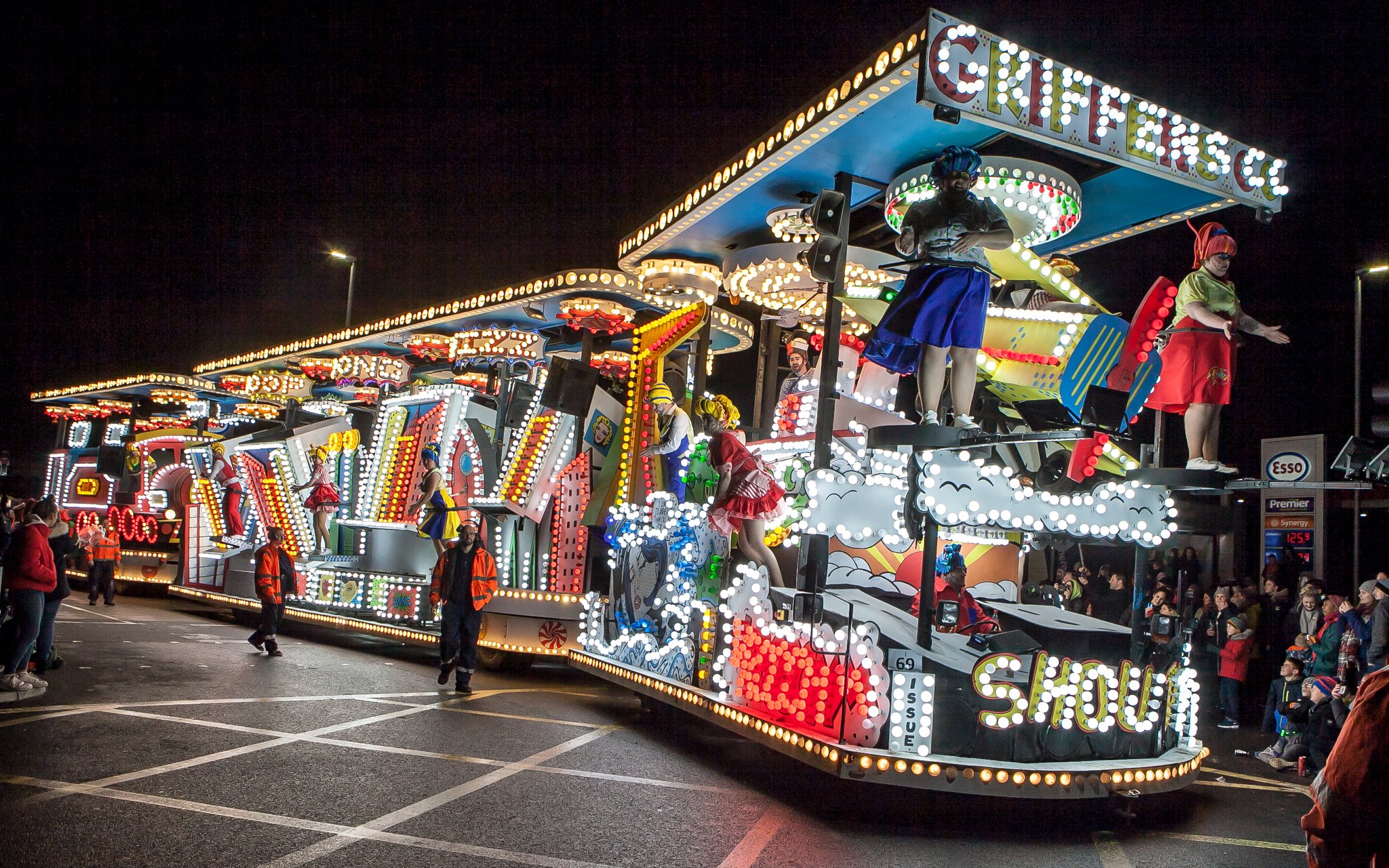