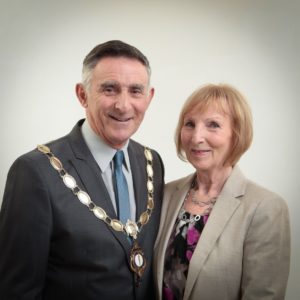 At the end of their three year term of office, it is customary for a president of Somerset County Guy Fawkes Carnival Association (SCGFCA) to donate a new trophy which will be awarded for future years to come.

This honour is now bestowed upon Malcolm Cattle as he spends the last few months at the helm of the Somerset Carnivals organisation, which incorporates Bridgwater, Burnham on Sea, Weston Super Mare, North Petherton, Shepton Mallet, Wells and Glastonbury Carnivals.

Carnival has played a major part in Malcolm’s life for 53 years, and he is privileged to have been a member of both movement and tableau clubs. Therefore this unique trophy, which has been designed by Malcolm and his wife, Terry, who live in Bridgwater, is to be known as the M and T trophy (Malcolm / Terry and Movement / Tableau). It will be awarded to the mounted entry from classes 1 to 6 (feature, tableau, juvenile or comic cart), deemed by the carnival clubs to have had the best movement or tableau on the SCGFCA circuit.

The trophy will be formally unveiled and presented for the very first time at the annual SCGFCA dinner on Saturday 5 December at The Tavern, Brean Leisure Park.