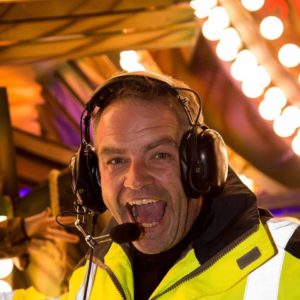 Place of Birth
Yeovil, as my family lived near Templecombe at the time.

Occupation
Co-owner of Frost Rescue, providing car and commercial vehicle recovery across Somerset, and the odd carnival cart too. I also present the Carnival Show every Wednesday evening on Sedgemoor FM.

What was your first childhood memory?
I was about two standing in my parent’s front garden, watching my uncle tip a lorry load of stone onto our front lawn to enlarge the driveway!

What is your favourite food and drink?
I love a nice curry, and as the years have progressed I have developed a taste for a ‘glass’ of red wine.

What is your favourite holiday destination?
I am not a massive fan of foreign travel. Last year I spent a sunny week on a canal boat (more wine) and loved every moment.

How did you first get involved with carnival, how many years have you been involved, and which clubs/committees have you been a member of?
I was bought a carnival video following the 1994 parade, and practically wore it out! A relation had previously been in Marina Sydenham JCC, and I got added to the waiting list! Once old enough, I moved on to my local adult club, which was the Puriton Pilgrims CC. Hard times for the club lead to a merge with Young at Heart CC, later becoming Evolution CC. By this time, the amalgamated club was based at Bridgwater Sports and Social Club along with Gremlins CC. A bit of engineering help from Gremlins in the quieter months was swapped for an extra male body on their stage  show. The rest as they say is history.

Best carnival cart you were involved with?
Gremlins CC 2012 – Revolution. Everything just seemed to click that year. It was an amazing cart to be on, and one that remains a firm favourite amongst many fellow carnivalites.

Favourite carnival cart of all time?
How to decide! Wills CC 1995 – Silverball Mania, and Ramblers CC 2000 – Calypso are the ones that stand out from my misspent youth! Trying not to be biased, but Gremlins CC 2019 – Curse of the Kraken was very special, and of course Revolution in 2012.

Favourite carnival concert stage performance of all time?
I could name most shows I have been involved with, but from other clubs, Andy Meek popping out of his Egyptian sarcophagus for Ramblers in 2009 is a firm favourite of mine!

Favourite song on a carnival cart?
I have a fair few favourites, especially with building a music archive spanning the last forty years for the radio show (OK and my own enjoyment!), but I’d have to say ‘The Eve of the War. from Jeff Wayne’s War of the Worlds would be the one!

What has been your greatest achievement?
Starting up our fledgling business in 2011 was a major risk that paid off. We are extremely lucky with the help we have had along the way from great friends and family.

Do you have any hobbies apart from carnival, if so what are they?
I have a few weird and wonderful vehicles that have been gradually restored over the years. Not there yet, but the to do list is getting smaller. I have been practising the art of signwriting by hand when time allows, and I also enjoy performing with local theatrical societies.

If you could be Prime Minister for a day, what would you pass and why?
Tax reform for the super-rich companies and individuals in our country is long overdue. Our public services and staff would then receive the funds they so desperately need.

If you were washed ashore on a desert island and you could have five companions, who would they be and why?
Whilst famous names may be tempting, I would have to pick five of my nearest and dearest – my other half, and our respective parents.

If you had a magic wand and could change one thing about carnival, what would it be?
Getting a pound from each spectator at every procession would be a great start!

What would you like to be on your epitaph?
I told you I was sick!

When are you at your most happiest?
Relaxing with my family somewhere peaceful. Did I mention wine?!