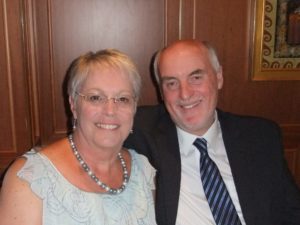 Dave Croker, pictured with his wife Janet also a Life Member has served on Bridgwater Carnival Committee for 32 years and has held the secretary and treasurer positions, was presented with the Pam Reed Trophy for services to the Somerset carnivals, after designing and introducing a successful electronic online entry form for all competitors taking part in the 2015 county carnivals. This is the second time in five years that the Bridgwater carnivalite, who first became involved with carnival in 1971, has been awarded the prestigious accolade.

Malcolm Cattle, president for the Somerset County Guy Fawkes Carnivals Association, who presented Dave with the trophy, said: “Nominations for this trophy are from fellow carnival peers and I would like to congratulate Dave on this well-deserved award. Its symbolic impact should not be underestimated as the introduction of online entry forms shows the carnival county organisation is prepared to move with the times, and this is something Dave has continued to do over the years.”

The new online system has not just saved club secretaries and walking entries considerable time and money in entering the seven county carnivals, it has also brought an element of standardisation and helped save the carnival towns a tremendous amount of time and effort in not having to enter the data from 100+ individual paper entry forms onto seven different computer systems. The new system has also eradicated the difficulties associated with interrupting hand written forms, and has enabled the spelling of entrants and titles to be consistent throughout the county.

Malcolm added: “Dave undertakes a tremendous amount of work for carnival as a whole in Somerset and not just Bridgwater, much of which goes unnoticed or recognised, and it is wonderful to see him win the Pam Reed Trophy as a token of our appreciation for his sterling efforts.”