Carnival Goes Back To It’s Roots

Bridgwater Carnival Goes Back To Its Roots 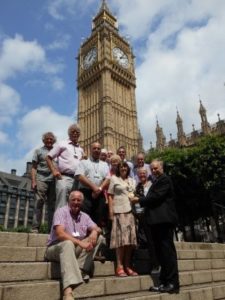 Event organisers visited the origins of the spectacular Bridgwater Carnival after accepting an invitation to the Houses of Parliament, by Bridgwater and West Somerset, MP, Ian Liddell-Grainger.

The visit came about after the carnival committee had asked Ian Liddell-Grainger to attend the official unveiling of a new and elegant statuette souvenir titled Remember Remember in October 2012.

Bill King, director and life member of Bridgwater Carnival Committee, said: “Following the success of our first Guy Fawkes squibber souvenir statuette which we launched a few years back, we came up with the idea of designing a more exclusive type of statuette which would appeal to the most dedicated and staunchest carnival supporters. 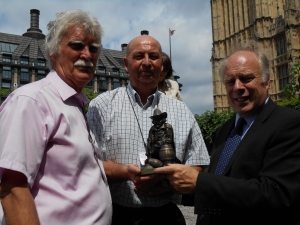 So we introduced our second Guy Fawkes statuette which was again sculptured by local carnivalite, Dave Faulks. This time it was casted in cold bronze resin by Heather and Robert Carter of Parrett Creations Ltd, and we sold them for £95, with a £20 donation made to The Beacon Centre for every one sold.

Ian was so impressed with the new statuette, he immediately ordered two – one for himself and one for the museum in the Houses of Parliament which he wanted us to personally present”, added Bill.”

It is well know the origins of Bridgwater Carnival lay within the Gunpowder Plot at the Houses of Parliament, and maybe it was because Bridgwater was mainly protestant in those days that the townsfolk celebrated with greater vigour than anywhere else in the country. In the years following the demise of Guy Fawkes, the people of Bridgwater have always marked the anniversary of the 5th November, and these celebrations have evolved into one of the largest illuminated parades in the world. 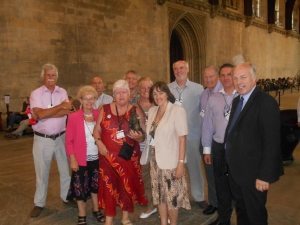 “We really appreciate Ian’s kind offer of us presenting a statuette to the Houses of Parliament, and we would like to thank him for taking some time out of his working day to meet us and for explaining the location of where Guy Fawkes was captured all of those years ago,” said Bill.

Ian Liddell-Grainger, added: “Bridgwater Guy Fawkes Carnival is an event which this country should be very proud of, and I would like to pay tribute to those on the carnival committee and in the carnival clubs who work tirelessly every year to put on such a wonderful show. It’s also fantastic to know a statuette representing Bridgwater Carnival is now in the Houses of Parliament museum.”

⭐️ENTRY WINDOW NOW OPEN⭐️ The application window to enter our carnival is now open! You can enter via our website & the form allows you to indicate which carnivals on the @SCGFCA circuit you wish to enter. Closing date 1st Sept! https://t.co/xbtyNm5tG4 https://t.co/2i0CLjjprv
h J R
@BCarnival