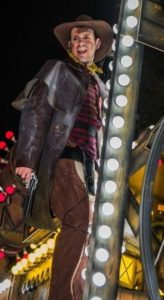 What was your first childhood memory?
I don’t know why, but I always remember when we were living with our grandad in Street when I was around 2/3 years old and going into his garden shed as there was a bird’s nest in there and some very young birds had just hatched.

Year first got involved with carnival
From birth due to dad being a life member of Lime Kiln CC. When growing up I used to attend the fundraising and social events and I remember doing performances at the club socials which were held at the Ambulance Hall with the other young Lime Kiln CC children which Gail Perry used to co-ordinate. There is also a video somewhere of a fashion show that we did at the Town Hall where different members modelled clothing and I was one when I was only around 2 years old. The earliest time I can remember helping with stage/cart was when we had our shed built at Bristol Road in 1997, and in 1998 when we did Toy Time and I helped paint the scenery

What is your favourite food and drink?
For anyone who knows me the drink would have to be cider, specifically Thatchers Gold. Or my soft drink choice is a bottle of Lucozade sport orange. With regards to food, this is a hard choice as I like eating lots of different types in large quantities!

What is your favourite holiday destination?
Growing up I was lucky enough to go to Florida a couple times and this would still probably be my favourite place I have visited. I am hoping I will get the chance to visit a lot more places around the world, as I do think there are lots and lots of interesting and beautiful places to visit and see.

How did you first get involved with carnival, how many years have you been involved and which clubs/committees have you been a member of?
As mentioned above, I have always been connected with Lime Kiln CC due to dad’s involvement. I have been a full member since 2009 and have been secretary since 2012. Previously I have also been the club’s assistant treasurer and sports captain. I was also treasurer for the Bridgwater Carnival committee for a three year period, as they needed someone to fulfil a vacant position and I was asked due to my occupation and involvement with Lime Kiln CC.

Best carnival cart you were involved with
Certainly the most enjoyable carnival cart I have been on was Proud Mary, which we did in 2015 for our 70th anniversary.

Favourite carnival cart of all time
The first cart I can remember thinking ‘WOW’ when I was growing up was Masqueraders CC’s Jack’s Back. I loved everything about it, the movement, the song, the costumes, the use of colour and the glitter with the lighting.

What has been your greatest achievement?
Becoming a partner at Michael J Dodden & Co. In carnival terms I think as a club is getting back to having a 100ft entry in 2018. A core group of people worked really hard over 4/5 years to get us back into that position after struggling with membership and money.

Do you have any hobbies apart from carnival, if so, what are they?
I am a big sports fan and will watch any sport, in particular football where I support Leeds United, cricket where I support Somerset, and rugby union. I play and coach table tennis and have done this for many years playing in various different competitions and leagues. I also play skittles regularly on a Thursday night in the Bridgwater town league, and I enjoy going for walks and taking holidays.

When are you at your most happiest?
When I have been fed!

If you could be Prime Minister for a day, what would you pass and why?
Reduce the taxes on beer and cider to help the pubs out!!! I would also pass a law to ensure that elderly people needing care, can have it without losing all of the savings they have built up by working all of their lives.

If you were washed ashore on a desert island and you could have five companions, who would they be and why?
Roger Federer (favourite sportsman), Lucas ‘The Chief’ Radebe (favourite Leeds football player), Peter Kay (favourite comedian), Freddie Mercury (Queen are my favourite band), Freddie Flintoff (he is just extremely amusing and was a cracking cricket player).

If you had a magic wand and could change one thing about carnival, what would it be?
An impossible one, but to ensure the weather was dry from the first week of October through to the last week of November. There is nothing worse than getting soaking wet while lined up in Clare Street during the carnival concerts, or on a carnival cart.

What would you like to be on your epitaph?
Someone who always gave 100%, gave a fair outlook on life and an opportunity to all, and who enjoyed himself.