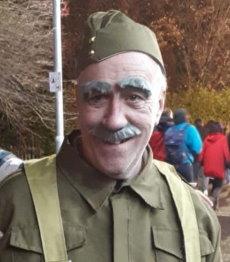 Full Name:
Dave Speed. I’m not too keen on David as it’s too formal, and I’m usually in trouble when called David.

What was your first childhood memory?
Blimey, that was a long time ago! It’s spending my early years on the farm which my Nan and Grandad owned at Chilton Trinity. I can remember so many things, including the layout of the farm, Dad milking, taking the milk churns up the track to the stand for collection every morning, haymaking and driving the tractors.

Year first got involved with Carnival?
1985. I was taken along to a Cavaliers meeting (at the Halfway Inn) by my then brother-in-law and voted in as a member. I’ve been interested in Carnival ever since the early 70s when Bath Bridge CC (now Griffens CC) used to build behind the old brickyard in Chilton, and we used to go and watch them build.

What is your favourite food and drink?
I don’t think you can go far wrong with a nice Sunday Roast, followed by fruit crumble and custard. As for drink, I don’t really drink a lot, but if I do it’s beer.

What is your favourite holiday destination?
I haven’t been to many places, but I do enjoy going to most parts of Spain, especially Majorca. I want to go to Florida one day, especially the Kennedy Space Centre, but I’m not sure if I could do 8 hours on a plane!

Best carnival cart you were involved with?
Now that’s a difficult one. There must be about 5 or 6 we’ve built over the years that I’ve been proud of, but I guess last year’s entry, Left Behind, just about beat the others due to the comments we received from other carnivalites whilst out on the county circuit.

Favourite carnival cart of all time:
Again another difficult one. The trouble is I don’t get to see the entries in the carnival procession as I’m always driving the cart for Cavaliers CC, so I never see the likes of Ghost Ship etc with everything lit and moving. Of course carnival carts look completely different in line up. If I had to pick one from recent years, it would have to be Gremlins CC’s Wild Bill’s Runaway Train, and from earlier years I would choose something like Galactic Guardians by Gremlins CC or Hinkley Point CC’s (Bohemians CC) King Ludwig’s Journey of Fantasy.

Favourite carnival concert stage performance of all time?
I’m afraid I haven’t watched the carnival concerts for at least 25 years, so it would have to be one of the Cavaliers CC’s shows I have been involved with. I think my favourite one is Medieval Entertainers from 1986. We started rehearsals late that year, mid July I think it was, and for some reason everything just clicked into place. We had great fun both rehearsing and on stage every night during the two weeks of concerts. To make it even better, we came 4th that year, the best stage result the club has had.

Favourite song on a carnival cart:
I think that would have to be ‘Victory’ as used on many a pirate themed cart over the years. It’s got a great tune and has easy words to learn, so whether doing a dance routine on the cart or just walking alongside as road crew, you can really get into it.

What has been your greatest achievement?
I would say bringing up my two children, both who are adults now, to be polite, well mannered, able to stand on their own two feet, and who go for what they want.

Do you have any hobbies, apart from carnival?
With my son, Matthew, we restore old tractors and farm machinery, and we take them to various rallies and shows around Somerset during the summer months (apart from this year of course). It’s surprising how many people in carnival share the same interest… although I don’t think it’s anything to do with having beer tents at the shows!!!!!!

If you could be Prime Minister for the day, what would you pass and why?
I can’t see anybody wanting to be Prime Minister with everything that’s going on at the moment. However if I was, I would introduce an instant ban on motorists who don’t use their indicators on roundabouts, junctions etc… not everyone is a mind reader!!

If you were washed ashore on a desert island and could have five companions, who would they be and why?
My son and daughter (although I’m not sure they would be too impressed), Michael Palin, because of his experiences from travelling all around the world, Phil Tufnell, for his great stories from his cricketing days, and finally Kylie Minogue, as I’m sure she would bring some class and entertainment to the group.

If you had a magic wand and could change one thing about carnival, what would it be?
I know nothings perfect, but I think it’s working fairly well at the moment. Everyone’s got used to the red tape regarding VSO, child protection, etc. Maybe one thing I would like to change is having judges who actually want to judge and who know exactly what they are judging. I know it doesn’t affect our club too much (regarding trophies etc), but it does make me think why do they bother when you hear about a minority of judges who look out of pub windows to judge entries and others who miss entries altogether during the procession. I know it’s hard getting enough judges to do the job, but you can’t just get people off the streets to make up numbers.

What would you like to be your epitaph?
I hate to think of what my kids would put on my tombstone! But I would say, ‘enjoyed life to the full and made many good friends’.

When are you at your most happiest?
When I’m with my family, having fun, or being knee deep in grease and oil as I strip down an old tractor.