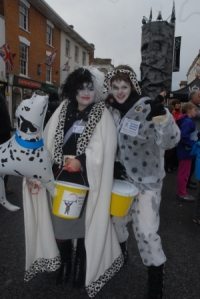 Following one of the most successful carnivals in modern times, Bridgwater Carnival Guy Fawkes Committee have donated just under £21,000 to local charities and groups.

The monies were raised during Bridgwater Carnival related activities between March 2012 and February 2013, and the donations were announced at the recent carnival committee’s annual general meeting at the end of April.

The following charities and organisations received donations, some of which were in recognition for assistance during Bridgwater Carnival 2012:-

In addition to this an extra £4,989 was raised for local charities by carnival organisers by taking a Christmas themed carnival cart around the supermarkets and streets of Bridgwater during the run up to Christmas 2012.

Dave Stokes, publicity officer for Bridgwater Guy Fawkes Carnival Committee, said: “Helping local charities and organisations to boost their funds is an integral part of the carnival which we are all very proud of, and is something which many people overlook.”