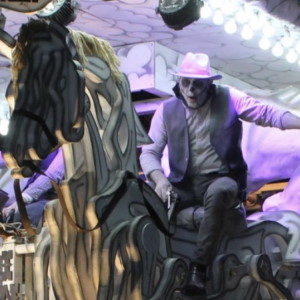 Tim has been a member of Westonzoyland C.C. for over 25 years, and is currently the club’s cart captain.

What was your first childhood memory?
Going to Play School in Westonzoyland.

Year first got involved with carnival
1995

What is your favourite food and drink?
Curry and a pint of lager.

What is your favourite holiday destination?
Florida

How did you first get involved with carnival, how many years have been involved and which clubs/committees have you been a member of?
I joined Westonzoyland Carnival Club in 1995, where I followed in the footsteps of my Dad, Richard, and older brother, Steve, who were both members of the club. I have only ever been in Westonzoyland CC, and 2022 will be my 27th year as a member. Officer positions I have held include chairman and cart captain.

Best carnival cart you were involved with?
2010’s Draco Militis (Dragon Warrior) was the first award winning cart I was ever involved with, Drunken Sailor (2017) was the most enjoyable cart, and White Bones Ranch, Ghost Riders in the Sky (2019) was our most successful entry. I can’t choose between those three.

Favourite carnival cart of all time?
Jack’s Back by Masqueraders CC in 2001.

Favourite carnival concert stage performance of all time?
My memory of concert performances is not too good. However, I really did enjoy Ramblers CC’s Christmas themed show at the Variety Show in 2021, it was brilliant entertainment.

Favourite song on a carnival cart?
Rocky Sharpe and the Replays – Shout Shout (Knock Yourself Out)

What has been your greatest achievement?
Being involved in the planning and construction of the club’s new shed between 2013 and 2016. It was a massive project for a club of our size.

Do you have any hobbies apart from carnival, if so what are they?
Following Liverpool Football Club and watching Somerset County Cricket Club.

How did you keep yourself busy during the national lockdowns during the pandemic?
Renovating our garden and hosting online quizzes for the villagers of Westonzoyland.

If you could be Prime Minister for a day, what would you pass and why?
I would introduce a law where people who have worked hard for their entire lives are looked after and cared for in their later years.

If you were washed ashore on a desert island and you could have five companions, who would they be and why?
My wife, Tracy, she would look after me!!! Gary Spraggs, my best mate to have a laugh with. Tom Hanks, he knows how to get off an island!!! Bear Gyrlls, to help keep us alive, and Micky Flannagan, to keep us entertained.

If you had a magic wand and could change one thing about carnival, what would it be?
That more money is raised for local charities during the street collections.

What would you like to be your epitaph?
Tried his best and never gave in.

When are you at your most happiest?
On holiday with my family.

A Carnival Cart fit for a Queen

Help us to tell the world Bridgwater Guy Fawkes Carnival is back!

With just over 7 months to Bridgwater Guy Fawkes Carnival returns to our historic streets, promotional activities have already started to tell the watching world