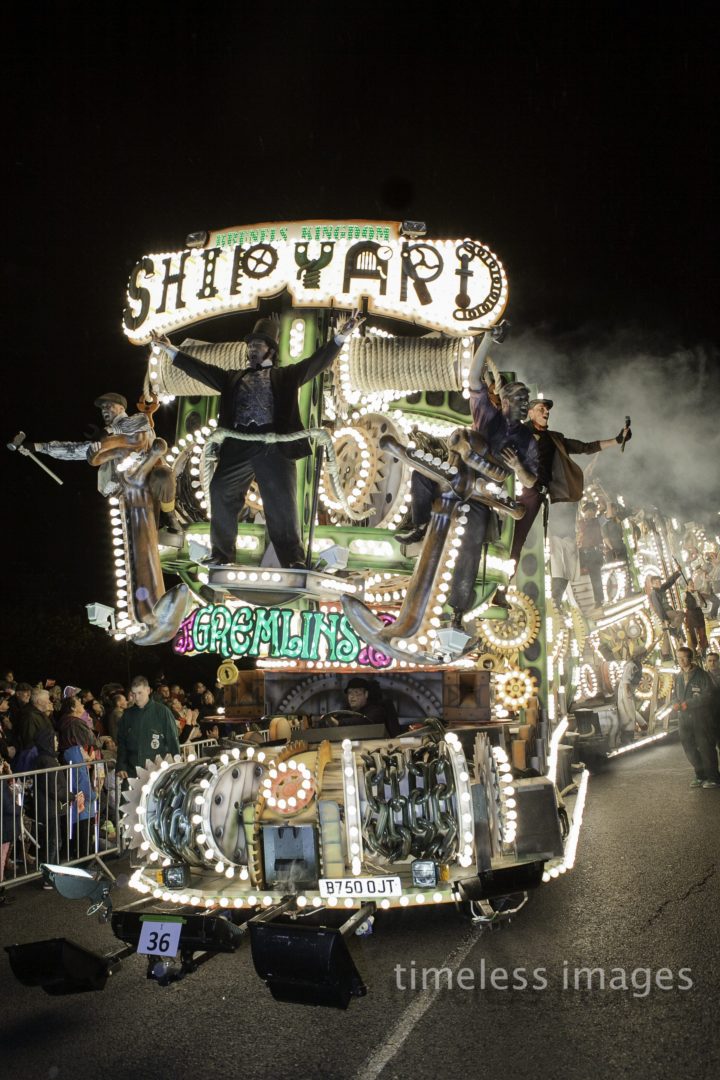 As the chairs were excitedly unpacked and strategically placed at the front of the pavements of this historic town in the early afternoon of a mild November day, there was a growing sense that something very special was about to happen.

These pavements have seen some amazing Guy Fawkes celebrations and related carnival processions over the years, but who would have guessed that what they were about to witness would be the best yet.

As the main attractions for the big event silently and efficiently took their place in the procession line up on the other side of this quiet Somerset town, the car parks in the town centre quickly began to fill up as visitors arrived early, all keen to be part of Bridgwater Carnival 2014.

It did not disappoint… the 2014 Bridgwater Carnival will go down in the history books as one of the greatest ever.

The warm up for the main event started at 10:30am as a fun packed daytime entertainment programme took centre stage, consisting of street entertainers, live music, marching bands, live radio broadcasts and a whole host of other activities. Generous support from main event sponsors Refresco Gerber UK Ltd and The Arts Council of England, together with other local sponsors made up of local businesses and organisations, ensured the town’s spirit was shining proudly early on carnival day.

The loudest cheers of the afternoon were reserved for 150 local school children whose moment of glory came as they danced their way through the jostling streets of the town centre. Some of the spectators for this lively parade were the parents and grandparents of the children taking part, others had come from different corners of the UK, and were enthralled and entertained by the children’s spirit as they eagerly waited for the evening’s proceedings.

By the time the official Bridgwater Carnival Guy Fawkes cart came into view, some of the spectators had been sat on their seats in the streets for five hours. During that time they had been joined by many thousands of others, all jostling for the best viewing position. There was no doubt, this was one of the largest crowds seen for many a year at Bridgwater Carnival.

125 entries took part in the carnival procession, including 50 illuminated carnival carts. These were lit by over 350,000 lights and were powered by approximately 18 megawatts of electricity. No wonder Bridgwater Carnival has the reputation for being one of the best and longest night time carnival processions in the world.

For the tenth time in eleven years, Gremlins CC took the accolade of overall Bridgwater Carnival procession winners with their breath taking entry Brunel’s Kingdom – The Shipyard, and in doing so were awarded the Hardy Spicer Championship Cup for gaining the most points from the carnival procession and concerts. Second place in the procession was awarded to Marketeers CC for their spectacular entry Battle of Atlantis which was entirely lit by over 87,000 LEDs, and third place went to Ramblers CC with Freeze.

In the local tableaux class, Wills CC took first place with their Christmas entry Merry Grinchmas, while in the open tableaux category Huckyduck CC took the honours with In Flanders Fields. First place in the open feature class was taken by Harlequin CC from Ilminster with their entry Tortuga. Other class winners on the night included Bridgwater based clubs Marina Sydenham Juvenile CC and Crusaders Cubs.

At the finale the awe inspiring squibbing display brought a fitting end to the 2014 carnival celebrations. 175 squibbers lined the High Street and held aloft a wooden stick (cosh) with a firework (squib) attached to it. These squibs are 300mm long and have a 200mm circumference and hold approximately 1lb of gunpowder. What an incredible way of bringing one of the greatest ever Bridgwater carnivals to an end.

The street collection also benefited from a bumper crowd on the night and the mild November weather. A grand total of £23,300 was collected – an increase of £2,580 on the money collected at Bridgwater Carnival 2013. These monies will be shared between the official Bridgwater Carnival charity and our 25 supported charities.

So as the chairs were finally lifted from the pavements and packed away after a long and eventful day, we can be confident about one thing. Those chairs will return next year when the carnival returns to town… and we can also be sure they will be joined by even more chairs. Bridgwater Carnival is here to stay!

The countdown for Bridgwater Carnival 2015 has already begun…

⭐️ENTRY WINDOW NOW OPEN⭐️ The application window to enter our carnival is now open! You can enter via our website & the form allows you to indicate which carnivals on the @SCGFCA circuit you wish to enter. Closing date 1st Sept! https://t.co/xbtyNm5tG4 https://t.co/2i0CLjjprv
h J R
@BCarnival