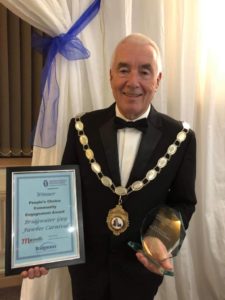 The carnival, which has the reputation for being one of the largest illuminated processions in Europe, beat off strong competition to win the coveted Community Engagement Award, which recognises businesses and organisations who make a difference to the Sedgemoor community.

Bridgwater Guy Fawkes Carnival’s new president, Mike Crocker, was presented with the award by Gavin Roberts from category sponsors, Maxwells Chartered Accountants, and said: “It was an absolutely brilliant evening, and we were so very surprised and proud when it was announced we had won the community engagement award.

The Sedgemoor Business Excellence Awards have been running for several years with the aim of rewarding companies, enterprises and individuals who are making outstanding contributions to growth and prosperity in the district. Tonight’s awards event was held at Bridgwater & Albion Rugby Football Club.