With just three months until what would have been undoubtedly Bridgwater’s biggest night of the year, Bridgwater Guy Fawkes Carnival has revealed the full details of its 2021 virtual carnival.

Taking place on Saturday 6 November at 7pm, the two hour online virtual carnival titled ‘Through the Decades’ will feature 100 entries from Bridgwater Carnival processions held over the past 40 years.

Usually Bridgwater Carnival is held annually on the first Saturday in November, and due to the Pandemic and the associated decision to cancel this year’s event, this will be the second successive year organisers have streamed an online virtual carnival on what would have been carnival night.

Dave Stokes, Publicity Director, Bridgwater Guy Fawkes Carnival, said: “First and foremost safety is our number one priority, and with so much uncertainty still in terms of the risk from the virus and the fact that the lockdown restrictions over the past 16 months have seriously limited the fundraising opportunities for us as a committee and the entrants themselves, we felt cancelling this year’s carnival celebrations was the most sensible option.

“So following the incredible success of last year’s ‘best of the best’ virtual live stream which raised approximately £10,000 for carnival funds, we have decided to do something similar for 2021 and have called this year’s production Through the Decades ”

The virtual carnival stream is being kindly sponsored by EDF’s Hinkley Point B power station, and is being made technically possible through the expertise of Maniac Films and Somerset Web Services. Those who tune into watch the stream on carnival night from the comfort of their own homes or from their local pubs are in for a real treat.

Dave Croker, Chairman, Bridgwater Guy Fawkes Carnival, added: “When we first set out putting this virtual carnival together, we wanted to remember and acknowledge some of the clubs and walking entries who have graced our carnival over the last 40 years.

“I think we have achieved that, and even though some of the entrants no longer take part in our carnival, I truly believe people will really enjoy this trip down yesteryear and it will revive some special memories of times gone by. We also have a couple of surprises planned, including footage of our carnival which has never been made available before.”

Those who are unable to see the virtual carnival on the night or who would like to watch it again, will be able to do so for a small charge by signing onto Bridgwater Carnival’s official Vimeo channel from Sunday 7 November.

Also available will be a limited number of official DVDs of the Through the Decades virtual carnival. These can be pre-ordered now for £10 (+ postage and packing) from the carnival website online shop.  Through the Decades souvenir calendars for 2022 will also be available to purchase for £5 (+ postage and packing), and again these can be ordered from the Bridgwater Carnival online shop. Both the DVDs and calendars can be purchased from local carnival club members and from the Carnival Centre, High Street, Bridgwater.

In the meantime, everybody involved with Bridgwater Carnival hopes to see the carnival we know, expect and love back on the streets of the town on Saturday 5 November 2022. 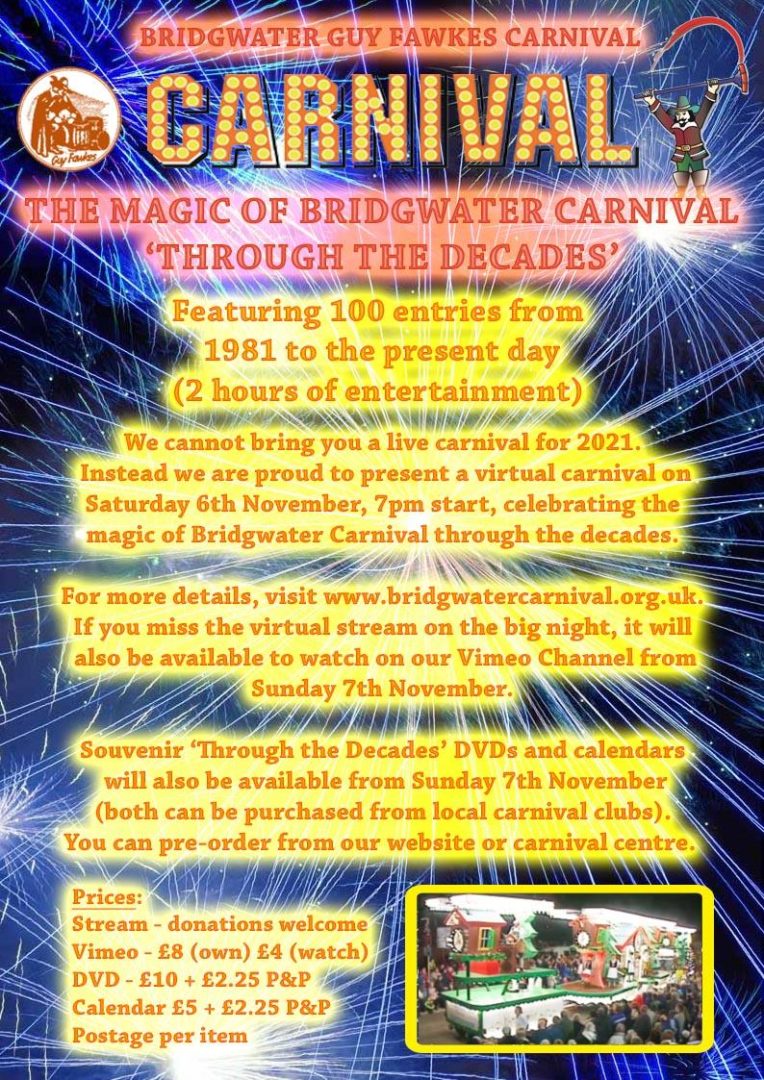