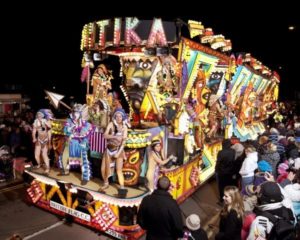 With just under two weeks to Bridgwater’s biggest night of the year, the final countdown has begun to Bridgwater Carnival 2013.

For the carnival clubs who are working around the clock to finish their spectacular entries, to the carnival organisers who are finalising the arrangements for the town’s biggest night of the year, the preparations are nearing completion.

Bridgwater Carnival’s origins lie in the failed exploits of Guy Fawkes, and in this, the 408th anniversary of these Gunpowder Plot celebrations, Bridgwater Carnival 2013 is set to be the biggest and best one yet.

Over the last couple of years traditional community carnival events throughout the country have disappointingly not taken place, due to lack of support and resources and the increasing amount of legislation and insurance premiums. Thankfully Bridgwater Carnival has managed to manoeuvre itself through these difficult times, and this is testament to the town’s dedicated carnivalites and the invaluable support received from the Arts Council of England, Gerber Juice Company Ltd (main local event sponsor) and many other local businesses and organisations.

On carnival day itself, the build up to the grand procession starts in the town centre at 10:30am, and carnival revellers will scarcely have time to pause for breath. There is just so much happening in the town centre with fun planned for the whole family. Early visitors will be entertained by a variety of acts, including ACTS, Young Generation, Bridgwater College Performing Arts students, City of Exeter Pipe and Drums Band, Wells City Band, Two Tone, MSG Jazz Quartet and other live music acts and street entertainers, to name just a few. Hot and cold food is being served in Bridgwater Town Hall throughout carnival day by carnival committee members and supporters.

More than 150 local children from 6 schools (Robert Blake Science College, Chilton Trinity Technological College, Kingsmoor, Somerset Bridge, Westover Green and Hamp) will be taking part in a children’s dance parade through the town centre at 2pm, and this has been sponsored by the Arts Council of England and Energy Solutions – Hinkley Point A power station. A children’s lantern parade featuring school children from St Mary’s Church of England Primary School, Woolavington Village Primary School, Elmwood School, Somerset Bridge Primary School and Bridgwater College Academy will also be getting in on the fun with a special lantern parade at 3.30pm.

Popular radio personalities Ed, Troy and Paulina who present Heart Breakfast every weekday across the West Country, will broadcast a special live show between 1pm and 5pm from the centre of the town.  The makeshift radio studio for the special broadcast will be based in the old Bridgwater Book Shop (courtesy of Sedgemoor District Council), in the High Street and the show will feature all of the latest Bridgwater Carnival news.

who present Heart Breakfast every weekday across the West Country, will broadcast a special live show on carnival day between 1pm and 5pm from the centre of the town.

The makeshift radio studio for the special broadcast will be based in the old Bridgwater Book Shop (courtesy of Sedgemoor District Council), in the High Street and the show will feature all of the latest Bridgwater Carnival news.

Drop by and say hello to them, and help Heart have a very memorable Bridgwater Carnival 2013.

The main carnival procession starts at 7pm and will be led by the carnival committee’s official Guy Fawkes cart. 128 entries will follow, including over 50 illuminated carnival carts, and will enthral the tens of thousands of people expected to line the procession route. The entertainment will be brought to a fitting finale when over 180 squibbers line the town’s High Street immediately after the procession for the traditional squibbing display.