The Day The Carnival Came To Town – A Bystanders Account

There is something very special about carnival day in Bridgwater – the home of not only the country’s oldest carnival, but of one of Europe’s largest illuminated carnival processions.

People from all over the UK descended in their droves to the town centre for this year’s annual offering, which took place on Saturday 3 November. All were absolutely determined to be part of this Somerset town’s biggest night of the year. 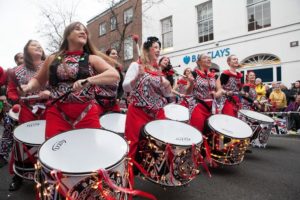 A regular feature at Bridgwater Carnival in recent times has been the provision of a fun packed daytime programme, designed to both entertain and enthral carnival goers as they eagerly wait for the evening highlight, and 2018 did not disappoint. Marching bands, street entertainers, dance-offs, live music and children’s parades, were all part of the mix as organisers once again served a succulent feast of top class entertainment.

As the clock ticked towards the start of the carnival, by early afternoon every type of chair imaginable was being laid along the 1.7 mile route, as enthusiastic spectators tried to claim the best viewing positions for the big procession.

While some sat, trying to keep the cold embers away and patiently waiting, others kept warm by dancing to the music emanating from the various stages in the town centre. To be fair the weather was kind and in complete contrast to the heavy rain which had been predicted just days before.

Day turned into night and people and continued to pour into the town. The queues to buy refreshments became ever longer, and the unmistakeable smell of hot dogs and onions filled the increasingly expectant air. Some estimates suggest the Bridgwater Carnival weekend is worth approximately £2 million to the local economy. Judging by this year’s events it would be very difficult to disagree. 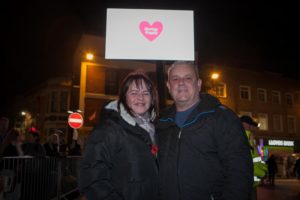 Amid all of the excitement, one man in particular was absolutely determined that Bridgwater Carnival 2018 would be one of the best days of his life. With the help of a large electronic display screen overlooking the shoulder of the Carnival Squibber statue and with the cheering support of thousands of onlookers in the town centre, Ray Roberts proposed to his girlfriend of 17 years, Sonia Williams. Thankfully she accepted his very public invitation, and after being initially pursued by photographers and reporters, they eventually disappeared into the crowds and anonymously waited for the carnival procession to arrive.

At the same time the carnival procession officially started at 7pm, those lining the High Street were treated to a high energy performance by Glastonbury Festival favourites, Arcadia Spectacular. Their creation The Bug made from submarine moulds and an Alvis Stalwart military truck graced the Bridgwater crowd and received a rousing reception.

Bridgwater Carnival is annually held on the first Saturday in November and is the first in a series of seven carnivals held over a two week period. Along with carnivals held at Burnham on Sea, Weston Super Mare, North Petherton, Shepton Mallet, Wells and Glastonbury, the ‘magnificent’ seven make up the Somerset County Guy Fawkes Carnivals Association circuit. For the locals the appeal of Bridgwater Carnival is because it provides that very first opportunity to glimpse the mesmerising carts before they move onto the other six carnivals.

Just under one hundred entries made up of some 2,000 entertainers took part in this year’s carnival procession, a balanced mixture of carnival carts and walking entries. Some of the illuminated carts were 100 feet of pure engineering wonder, with cast members following choreographed dance routines and lit by LEDs and a smattering of now ‘old fashioned’ traditional light bulbs . The walking entries complimented the carts superbly with their innovation and ingenuity, and the themes on display were wide, varied and diverse.

Of course like any live show, there is always a risk of something not quite going to plan. Combine this with the fact for many carts this was their first outing of the year, then it’s not entirely surprising that the occasional hiccup occurs. A couple of the carts did break down on the night, including one which had to be pulled from the narrowest part of the procession route by a recovery vehicle. However, despite the delays the breakdowns caused, many of the spectators remained rooted in their positions cheering on the remaining entries until the last cart had crossed the finishing point. 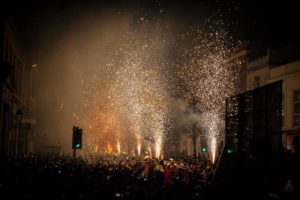 Together with the carnival procession, Bridgwater is synonymous with the practice of squibbing. For centuries the spectacular simultaneous squibbing display has brought the Bridgwater Guy Fawkes Carnival celebrations to a dramatic climax in the town centre. Nowhere else in the world stages such an amazing event, and squibbing is by definition the simultaneous firing of lots of large fireworks. 15 minutes after the procession had finished, 150 squibbers lined the High Street cheered on by thousands of people who had congregated to watch the 2018 Bridgwater Carnival celebrations come to an end for another year.

As the crowds started to disperse and the streets started to return to some sense of normality, many of the carnivalites began to congregate outside of the town hall. The carnivalites come from many different clubs with friendly rivalries between them, and even though they all say carnival is first and foremost for fun, they all like to know how the 79 judges ranked them on the big night. The results were announced just after midnight, and for one particular Bridgwater carnival club they just couldn’t quite believe what they were hearing. Marketeers CC had not won Bridgwater Carnival since 1985 when Margaret Thatcher was the country’s prime minister and the soap Eastenders first hit our TV screens. However, 33 years on and they claimed the top feature spot again at Bridgwater Carnival with their popular entry Consider Yourself (Dickensian). The first placed tableau entry was Wills CC with their poignant entry Gettysberg. Our congratulations go to the winners and all of the entries who took part.

Moving away from the glitz and razzmatazz of the entries, on the night the 350 street collectors and 8 collection carts on duty raised £22,700 for good causes. This will be shared between the official Bridgwater Carnival charity and 38 other well deserving charities and community groups. 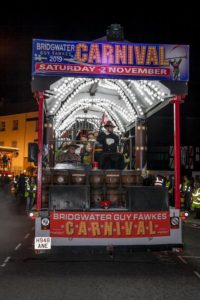 So that’s it for another year! We all know things are extremely difficult at the moment with the seemingly never ending recession we find ourselves in. Unfortunately some historical community activities and carnivals in other towns which have been running for hundreds of years have fallen foul of the times we live in. Thankfully Bridgwater’s special and cherished carnival celebrations have found ways of defying the odds and are continuing to survive. This is credit to everybody involved with carnival in Bridgwater – the entertainers, the committee members, the sponsors, the local authorities, Arts Council England, the list is endless.

The night the carnival comes to town is special and it is a night when Bridgwater can really stand proud and compete against other world famous carnival towns and cities from around the watching world. It is a magnificent spectacle in a wonderful town and let’s hope it continues to entertain for many more years to come. It certainly did us proud in 2018.